Save The Date & Organise A Billfish Babes Team For These Worldwide Female Billfish Tournaments.

Travel the world and fish as many female billfish tournaments as possible. Check out these fishing competitions below and their locations are second to none world-class fisheries.

Indeed the friendliest club on the coast! The Billfish Babes is a one-day game fishing shootout for ladies only! This tournament was first held in 2014 and was sanctioned the following year. Billfish Babes was designed to get ladies out on the water, make new friends, have loads of fun!

The most unique ladies billfish event in the world!  Undoubtedly this ground-breaking event brings women from all nationalities and experience together to share in their love of the ocean and fishing! This is a fun, champagne-filled weekend catered to women, by women. The two-day fishing tournament is held in Quepos, Costa Rica at the prestigious Marina Pez Vela. Also, a portion of all proceeds will be donated to an amazing organization called the Seeds of Hope.

In 1986, a group of ten enthusiastic lady anglers organized the Ladies Annual Fish-Off to raise money for a local children’s charity. The first ladies-only saltwater tournament was held at the Sands featuring 72 boats and 125 anglers. Unquestionably the longevity of the Ladies Annual Fish-Off is a true testament to the fishing community in Southeast Florida. The lady anglers are firstly family-focused women with a passion for fishing and their community. This tournament is planned and executed 100% by volunteers. It is noteworthy amazing what can happen when a community comes together. Since its inception, over $532,000 has been donated to beneficiaries.

Although winners always walk away with a handsome prize. The core of the Big Rock Tournament is focused on giving. Every year, hundreds of thousands of dollars are generated for cancer research and other local causes. Additionally, thousands of locals and out-of-town guests gather in the spirit of fun! Join them in Morehead City on June 2019 for what will surely be the best yet—the 61st Annual Big Rock!

The Tournament Committee is made up of a group of fisherwomen from Puerto Morelos. They want to activate the practice of sport fishing in the women of our Mexico.

As its own nonprofit organization. Bluewater Babes Charitable Trust has proudly donated more than $600,000 from the annual Fish for a Cure event and other year-round events.  In 2015, they established their own financial assistance fund “Out of the Blue”. Where they furthermore directly assisted local women undergoing treatment for breast or ovarian cancer.

Fun, fishing & friendship! This is Australia’s biggest women’s game fishing tournament of the year. Affiliated with QGFA Queensland Game Fishing Association. At a social function prior to a fishing tournament in 1983, a group of adventurous women came up with the idea of running a tournament for women only. Thus giving them the opportunity to experience what was seen as a predominately male recreational pastime.

The seed was sown. The idea of Ribbons grew to reality and the first-ever tournament was held on December 1984. The undoubtedly overwhelming response from keen women anglers has seen this tournament grow from humble beginnings to one of the highlights on the Cairns fishing calendar. Entrant numbers (as many as 46 boats and 160 anglers in one year) rival those of dual-gender tournaments such as the Lizard Island Classic and the Townsville Billfish Challenge.

Find out more about the Billfish Babes Community 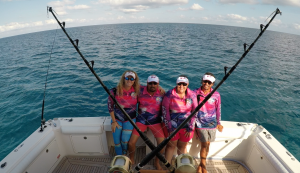 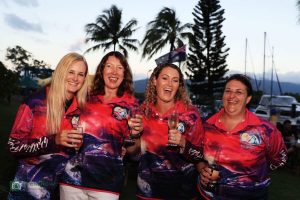 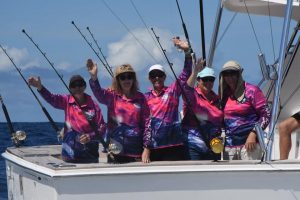